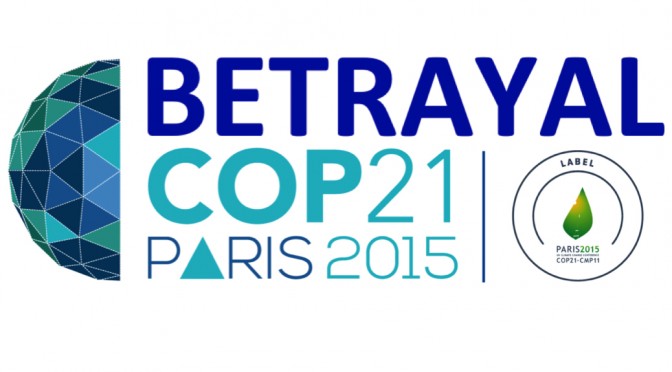 Any news that’s two days old will sure be ignored. You would therefore expect everybody in that press room to have been busy spreading the news, even more so when their peers were all reporting from a „historic“ event. Not this time, though: Just then, the media granted itself a little pause to applaud, a peer recorded. „Joy without end“, one of them reported from the final moments of the conference. Its participants hugged one another. Many had tears in their eyes. Germany’s minster for the environment immediately made a statement — tears of joy in her eyes, too — about the „historic moment“. Barack Obama was pleased, too. „This is huge: Almost every country in the world just signed on to the #ParisAgreement on climate change—thanks to American leadership“, he tweeted. Will future generations be happy with the outcome of the Paris agreement? Would the non-human living nature have a reason to celebrate? There is reason for doubt.

When the Paris climate conference closed, the participants awarded one another and themselves a minute of standing ovation.

„We did it“, was the conference’s official tweet. Sure, the conference had just finished, after an extra day. Attendees could rightfully be happy to leave for home and go back to minding their own smaller business, and keep minding it the way they wanted to. What was agreed in Paris?

The Paris‘ climate conference decided on December 12, 2015, proudly and joyfully that:

The conference’s core decision, however, was to agree with country specific emissions that are sure to breach the 2-degrees objective by a large margin. The Paris Agreement will come into force by the time when the amount of carbon dioxide, which will rather „safely“ induce 1.5 degrees of temperature rise, will already have been emitted. The participants of the Paris conference implicitly but proudly decided that targets shall be disregarded.

The Paris Agreement explicitly invites the scientists to compile a special report in 2018, to instruct the United Nations on what should have been done to limit the rise of the global temperature to 1.5 degrees, as if this were not already clear enough, as if this were not too late. It is easy to predict that the IPCC will again suggest negative CO2 emissions. What else should it do? Hence, it should not. The scientific basis for considering large scale negative emissions to be possible —politically feasible— is more perfectly diluted than any homeopathic remedy has ever been.

If a relative miracle from a United Nations Framework Convention on Climate Change conference is an absolute disaster, the UNFCCC’s problem solving capability should finally be questioned. Can the UN provide the right framework to address the climate crisis? It is long overdue to ask this question. It is overdue to give the right answer: No, it cannot. It should quit to pretend to.

Instead of holding on to the ill-fated process of the UN, alternatives should take over to address the climate crises on a global scale. Alternatives have the potential to quickly overtake the UN’s weak approach. At least one idea for a mechanism that could be the core of an alternative was proposed ahead of Copenhagen, but it was ignored. Another one, proposed before the Paris conference took place, gained more attention. Both of these proposals originated from prominent US economists.

Influential Ernst Ulrich von Weizsäcker had long ago proposed Realpolitik to address the environmental crisis —at least as a word. True leadership by a big polluter will be required to get the word to act on climate change.

Tragically, everybody agreed to the absolute Paris disaster —almost. Every country did —almost. But every country is not everybody.

We ignore the opinion of, say, narwhals, corals or phytoplankton. Their requirements are rather well known, but they were easy to disregard. On the historic 12th day of December 2015 it was consented by those „duly authorized to that effect“, to disregard the requirements of many life forms on planet Earth and drive them to extinction.

It is not the first time a species alters the climate and thereby wipes out much of life. It happened before, more than once.

For example, about 650 million years ago, masses of one little species pulled carbon dioxide out of the atmosphere at such a rate that planet Earth froze over almost completely. It certainly destroyed most of evolution’s by then 3 billion years worth of achievements. But now, for the first time in Earth’s history, one species sets out to destroy much of life knowingly. The species in charge —duly authorized or not— calls itself sapiens. Our „leaders“ are proud of it. The media applaud. The Paris Agreement is truly a historic decision.

Unlike historic decisions that lie further back in time —think of the Weimar Republic’s empowerment of Hitler as one example— the consequences of the decision taken in Paris two days ago can still be fended off and reversed without excessive hardship. True leadership and courage to resort to Realpolitik will be required. Time is in short supply. Paris is not the end. It should be the end of the beginning. Paris should end this awfully long period of climate appeasement. It should end the too long period of self-betrayal that the UN can deliver on climate change.